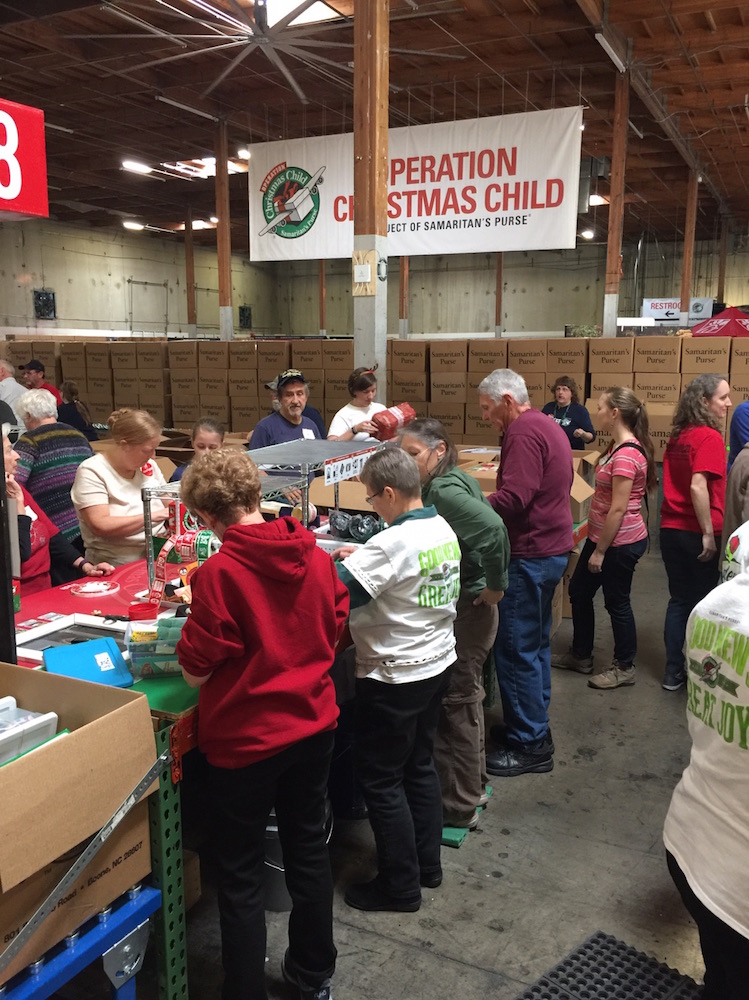 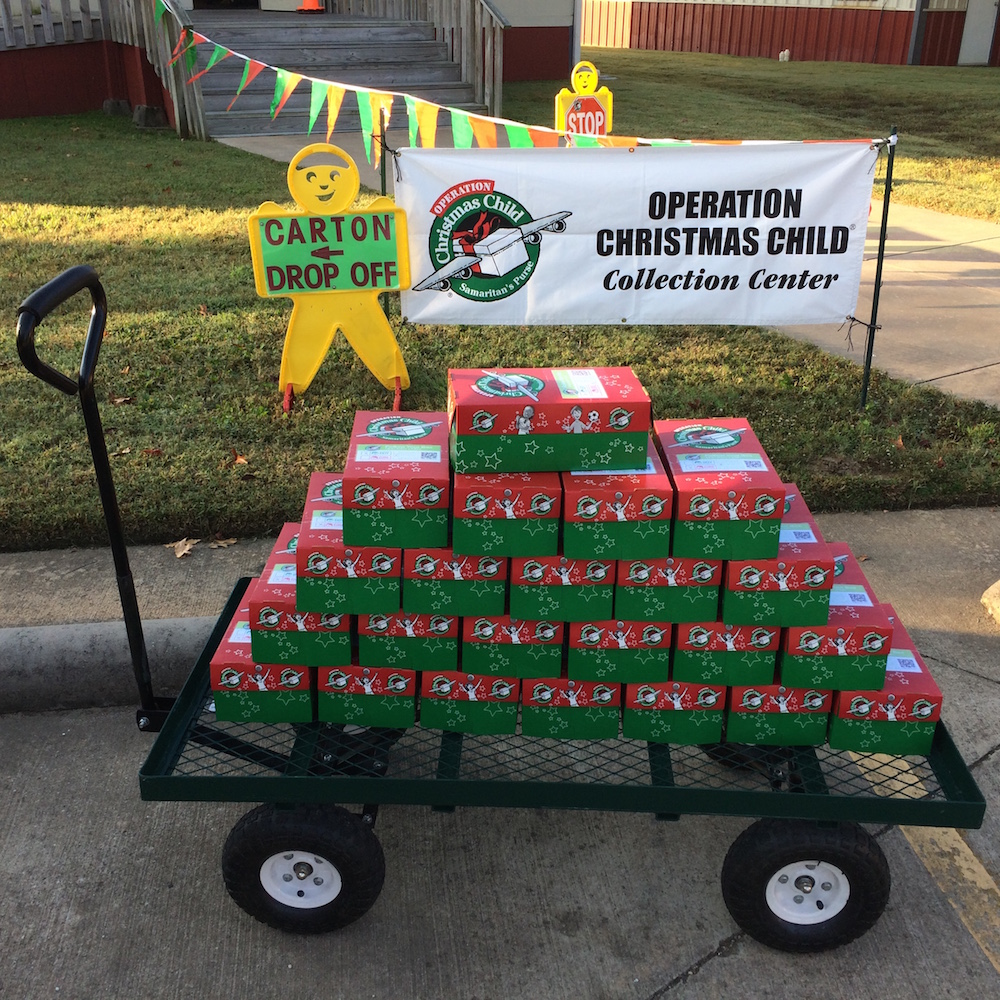 From start to finish, it was so much fun to create these 23 precious shoeboxes using the profits from our Shoebox Packing Party product sales. Follow the journey of these 23 simple gifts from our hands to the 23 sweet children in Honduras who God chose to receive these particular shoeboxes in the photo collection below! If you’d like to see what’s inside each of our shoeboxes, click here.

which is where ItsMadeCreatively’s 23 shoeboxes went in 2016! 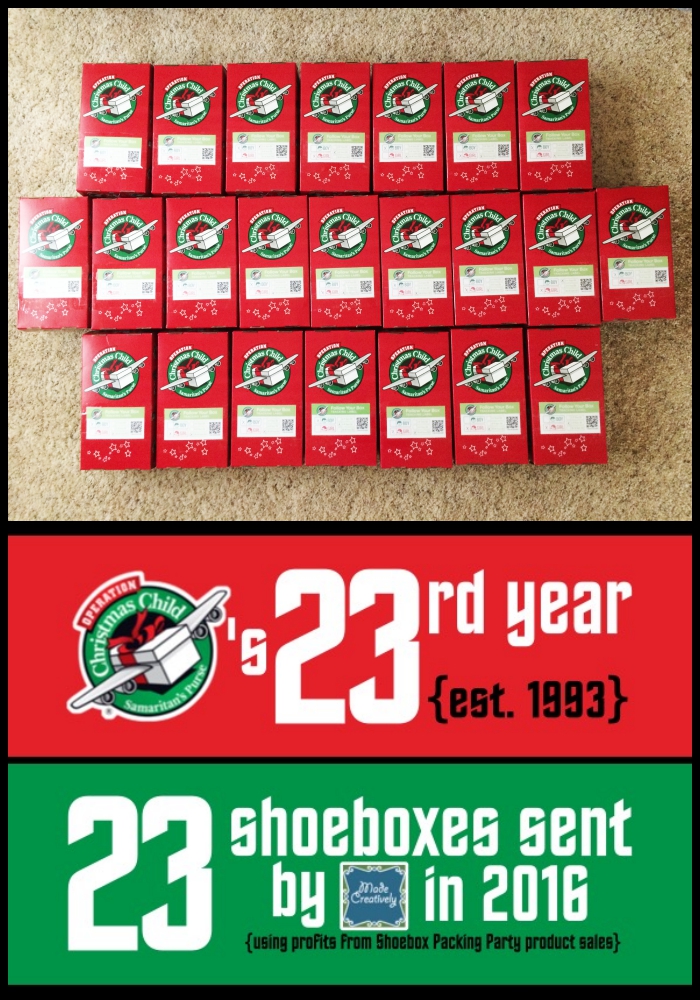 Our 23 shoeboxes created from Packing Party product profits are ready-to-go for National Collection Week! We purchased the Follow Your Box barcode labels online yesterday and found that they have a cute new design which inspired us to share our top 10 Follow Your Box tips!

We hope you’ve found these Follow Your Box barcode label tips helpful and will choose to follow your shoeboxes this year! 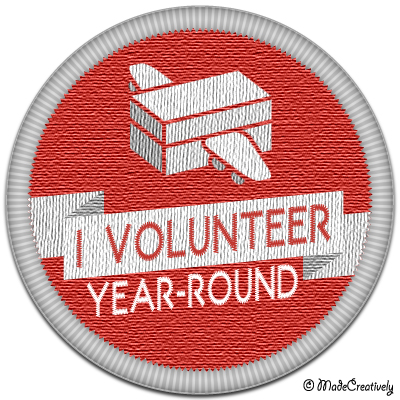 Trading cards, medals, daily steps, number of visits to each U.S. state… we all seem to count, track or collect something. Most of you probably share your accomplishments with friends and family on social media which got us thinking… wouldn’t it be neat to be able to share your Operation Christmas Child accomplishments with fellow OCC fans? Suddenly, the idea of a Shoebox Patch was born! Meticulously designed to look like a real embroidered patch, each patch features stitched lettering and graphics using a process never-before-seen at ItsMadeCreatively and took hours to fine-tune. As the number of Shoebox Patches continues to grow, we find ourselves imagining what it would be like to iron them on a vest or sash! So if you are looking for a fun way to keep track of your Operation Christmas Child accomplishments, then start pinning these ItsMadeCreatively-exclusive Shoebox Patches to your Pinterest boards!

Pin these Shoebox Patches if you’re a Year-Round Volunteer, have held a shoebox packing party and more!

How many Operation Christmas Child shoebox did you pack this year? Pin the appropriate patch to share the news among your friends and family!

Whether you’re a pro at packing Operation Christmas Child shoeboxes or have only recently begun donating shoebox gifts, pin the Shoebox Patch for the appropriate year in which you began giving shoeboxes!

If you’ve had the amazing opportunity to volunteer at an Operation Christmas Child Processing Center, then pin the Shoebox Patch for the appropriate location!

We have received several requests from customers for a shoebox-themed “thank you gift” over the past year and today, are happy to announce the release of a product to fulfill that request! Drum roll please… Introducing, the Shoebox Shirt Favor Box! This t-shirt-shaped favor box comes in three styles:

Whether you need a gift to thank the volunteers at your shoebox event or simply to hand out to guests at your Operation Christmas Child shoebox packing party, these adorable shirt favor boxes will do the trick. They are easy to assemble too!

Don’t forget… All profits from this product will be used to create/pack/ship Operation Christmas Child shoeboxes! 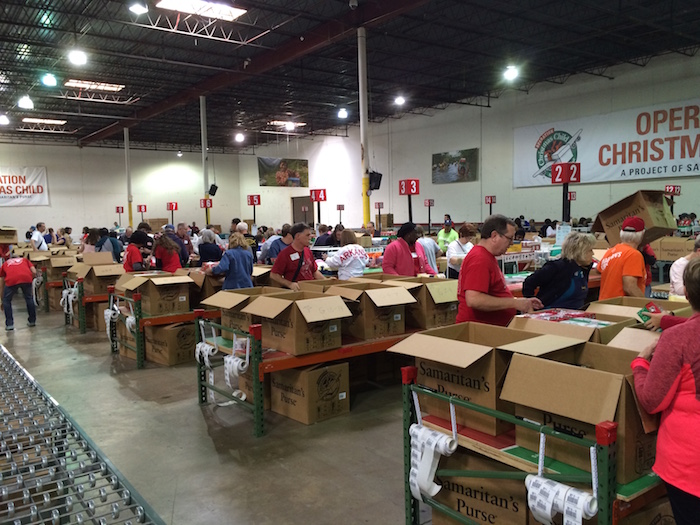 When Operation Christmas Child’s National Collection Week ends, those who are in charge of a Collection Center take a moment to catch their breath before heading down to the Processing Center to volunteer. The Processing Center we visited was open from November 24th to December 18th and processed over 700,000 shoeboxes!

This year we were able to volunteer three times at the Processing Center with shift lengths of 4 to 7 hours.

A must-see at the Processing Center is the Gear Store which offers lots of great OCC items like shirts, ornaments, Tervis cups and more.

Nearby, at the Year-Round Volunteer booth, we were given a button to wear that said “I’m a Year-Round Volunteer”! Next, we stopped by the Prayer Wall, which was a new addition to the Processing Center this year. It was covered with photos of children who have received a shoebox! Simply choose a photo, write a prayer for that child on the back and re-pin it on the wall. This is the photo we chose…

Last year, the Processing Center had a giant USA map for volunteers to stick a pin into it, marking their hometown. It was cool to see all of the places around the country and across the globe that people had come from to volunteer. There wasn’t a map this year but I hope it returns in 2016!

Sadly, many wet shoeboxes arrived at the Processing Center due to leaky semi trailers. Each had to be opened up and laid out to dry for days in front of giant fans.

We handed the greeter a FAST PASS for our group and each of us received name tags. Make sure to get a FAST PASS for your group too – it makes sign-in so much faster and easier!
Next, we received orientation on how to process a shoebox. There was a short video and examples of a line table, Follow Your Box labels and of shoeboxes in cartons.

Exiting from orientation put us right in line next to a beautiful Christmas tree where we waited for openings on a line. All of the cartons you see behind the waiting line are full of shoeboxes waiting to be processed!

There were 18 lines with room for up to 13 volunteers on each – we were placed on Line 1. Cartons of shoeboxes arrived on rollers where Pre-Inspectors removed the shipping money, placed it into a lockbox and ensured there was a marked Boy/Girl label. Once done, they placed the shoeboxes on the white shelf for the Inspectors who removed any inappropriate items listed on the sign. They placed the shoeboxes back on the shelf for the Tapers who taped each closed. Sometimes that is a challenge! Next, the shoeboxes get handed to the Scanner if there was a Follow Your Box label who scanned it and passed it to the Cartoning volunteers. They fit as many shoeboxes as possible into the cartons, each marked with an age and gender. If an Inspector removed inappropriate items or if a shoebox was poorly filled, they were able to add a few of the donated filler items like these shoes. There were several large bins of items – one even had thousands of pencils in it!

You never know what you’ll find when processing – one day, we found a pinecone in a shoebox! The coolest item we saw was wind chimes which hopefully will be included in MadeCreatively’s shoeboxes for 2016. Here is a photo of two shoeboxes that someone found coming down their line. One is wearing a tutu and the other is fashioned to look like a teddybear wearing overalls! Both boxes were designed to be easily opened – Wow!

Soon, it was lunch time and we took a break to visit the vendors who arrived with tasty meals for volunteers. Chick-fil-A offered a $5 chicken sandwich with chips and Firehouse Subs had a small variety of $5 sandwiches and chips.

Although we love Chick-fil-A, we all chose a ham sandwich from Firehouse Subs and sat at the picnic tables, watching the activity of the lines while eating.

Energized by the food, we were ready to process more shoeboxes! Returning to Line 1, we were surprised to have the same couple who we met last year at the Processing Center, placed on the same line! We all laughed at the odds of being on the same line on the same day, during the same shift – one year later!

After finishing your volunteer shift, you could choose a free t-shirt and commemorative ornament before leaving.

Heed the rules. They are there for a reason – to keep everyone safe on the line and to ensure each shoebox is processed correctly so it can arrive in the hands of the child its meant for.
Ask. When in doubt, ask a coach! Rules for inappropriate items change frequently so before you throw it out, ask a coach.
Volunteer. The Processing Center needs YOU! 700,000 shoeboxes can’t process themselves so sign up your friends and family to volunteer several times!
Enjoy. Guess what? You’re surrounded by others who love OCC just as much as you do – maybe more! Enjoy the time with fellow shoebox fanatics.
Flexibility. At some point during your shift, you’ll probably be asked to fill a role on the line that isn’t you’re favorite. Be flexible – coaches and other volunteers appreciate it!
Understand. You are the volunteer – not in charge of the line. Nobody enjoys working with a someone who is bossy, rude or thinks they know everything. I was surprised to find quite a few volunteers who took the fun out of processing.
Never underestimate the role you have on the line. Each one is super important! Removing the money for shipping, checking for inappropriate items yet keeping the box’s integrity in tact, taping the box closed so nothing falls out, scanning the Follow Your Box label accurately so donors can learn where their box went and finally, cartoning shoeboxes to fit as many as possible into those cartons! 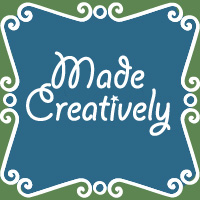 We were there when the Chick-Fil-A Cow met a shoebox costume at the DFW Processing Center for Operation Christmas Child shoeboxes!

A photo posted by Operation Christmas Child (@operationchristmaschild) on Dec 4, 2014 at 12:09pm PST

Need Face Masks? Order here or visit our Etsy Store for masks for your family! Dismiss